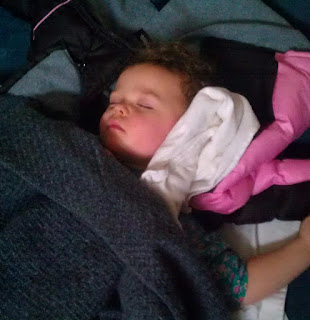 Ear infection, y'all.  That there is Little Miss Kickboxer sleeping on my office floor, a couple of hours after her pediatrician appointment, which confirmed the redness and swollenness--no, not of my eyes after waking up in 60-90-minute intervals all night to soothe a preschooler in agony, but inside my sweet little daughter's ear canal.

Which can mean only one thing, right?  No binkie (ha, ahead of you there, doc with the bedside manner of an HP AIX workstation!) and, well, these things can clear up after 2 to 3 days if they're viral.  But if they're bacterial, hello! antibiotics.  So, since I'm not too big on antibiotics because they, you know, make people poop funny, we'll be surviving on non-working eardrops and baby ibuprofen for two more days.  When those are over, I can fully see myself persuading the pharmacist to give me Zoloft instead of amoxicillin.
Posted by Charlotte at 2:08 PM

Not a lie--just a creative re-imagining of reality! 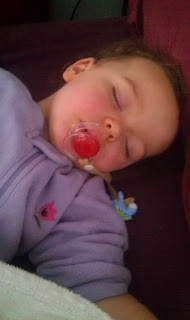 But seriously, what other choice does a mom have when a three-year-old has been steadfastly refusing to give up her yucky, yellowed, bacteria-laden and almost unsterilizeable night plug?

Yes, yes, I know:  You're supposed to take them away from them at 1 or 2 years of age, when they get started on potty training, in order to mark the big-kid change in their lives.  But puh-leeze, not all kids are made the same; not all boys go to bed with their favorite plush truck, and not all girls coddle their favorite doll.  In fact, Little Miss Kickboxer does neither; instead, like Linus, she drags her favorite blanket and her super-soft plush moose named Mookie everywhere.  Well, those two and her binkie.

Which went missing this morning, in the early morning hours, from underneath Mookie's butt, where it had fallen during the night.  Somehow (*cough cough*), it went missing into the deepest depths of the medicine shelf where it won't see the light of day again until our angelchild enters middle school--kind of like the toenail fungus cream we've had there since ... but I digress.

So, this morning, a sleepy, crazy-clownhaired little girl toddled into the kitchen where I was preparing her breakfast eggs and asked "Where is binkie?  I can't find binkie, mommy!", and I--SHAME ON ME!--laughed it away, saying "Binkie probably fell behind the bed."  Then I walked casually into her bedroom and looked:  Behind her bed, behind all the plush animals, under the pillow, under the bed, under the big pile of books.  Nothing.

She stood there, lower lip quivering, with tears in her eyes:  "Binkie fly away!"

You see, ever since her third birthday, we had looked at that thing every evening, noted its increasing lack of viscosity and yellowing.  It looked somehow like it was maturing, so why not align it with the caterpillar turning into a butterfly or an egg giving way to a bird?  The binkie story was born!  It goes like this:  When a kid turns three, the binkie starts changing--it starts getting yellow and harder and then, one night, it will grow wings and fly away to a little baby that was just born.

You're welcome.  Feel free to modify as needed.

There was much hugging this morning, and much cuddling, but the heartbreaking sobs didn't happen yet.  Those, I am sure, will come this evening, which is when we may have to color a binkie picture or tell the binkie story as it evolves.

It really isn't lying, I think.  It's a creative expansion of an evolving reality.  Which is what I will experience after Little Miss Kickboxer's wailing will rob me of my of course completely undeserved sleep for the next three-plus nights.

Speaking of which (which what?  Huh?  Whatever!), I'm on the job hunt again.  My part-time contract expires at the end of June, and I like the idea of working where I live too much to give up on the university completely (although I'd like it much more if the benefits kicked in full-force and the paycheck were, well, commensurate with my skills--despite the, you know, shameful Ay-Bee-Dee).  So, I'm determined to do three things:

2.  Make myself indispensable to the boss's boss's office.

The trick with #1 and #2 is, though, to act not as if I'm worried about not finding a job (Hello, Dale Carnegie, I may already have made that mistake, so there may be an impression to correct), but as if I'm getting ready to wrap up a 10-month consulting gig by contract end.  In other words, I'm delivering my deliverables--and then some, since "overdelivering" (one of those classic marketing terms I picked up along the way) is a biggie when it comes to creating customer loyalty.  Take today, for example, when a simple email conversation with the legal folks all of a sudden had the boss's boss on the cc line because hey, there was an idea, and then there was light and the light was good and probably pretty impressive, most likely setting the upper echelon's hearts aflutter because, hey, it looked like I knew what I was talking about.

That and the prospect of money.  Which is why I am about to create and not one, but two separate job descriptions for what I think needs to be accomplished to "move the institution forward."

Of course, said job descriptions need to be shopped around--which means networking, working through TBIK to get audiences with Teh Important People, and "accidentally" leaking these documents, along with an updated resume, to the powers-that-be.  I mean, who hasn't had an unintended name on the cc list ever in her or his life, right?  Or who could ever completely control the forward trail for documents sent out for confidential (*cough cough*) review?  These are the things I will need to work in the coming couple of days and next week, before all budget decisions are made.

Speaking of which (again?), a good third strategy might be to create competition, both internally and externally.  So, after doing all the working and networking in the previous paragraphs, then some, and then some more, waltzing in with an external offer in hand and ask how much they are prepared to counteroffer should seal the deal--aka the old academic game.  Now, given the short timeframe and the , that might not happen in the next week.

But it may need to happen, anyway, since academia has the annoying habit of getting sh*t done at the eleventh hour, and I'm getting too old for these shenanigans.  Plan B, you see.  Or, in this case, Plan C.

Plan D will, as always, be to cry hot salty tears into my nonexistent mousepad.

We'll see what this year brings.  After all that 2011 did to us, I'm still leery about ever trusting a year again, especially an even leap year that isn't even divisible by three and does not end in -y (and how silly does "Hi there, Twenty-Twelvy" sound?).

Pardon me while I step into the bathroom.

And just incase you were wondering:  No, this is not going to be one of those wistful "It's been a hard year, but I'm thankful, anyway" post.  In fact, if I could turn the clock back to December 31, 2010, I'd be fine with moving into January 1, 2012, thankyouverymuch.  2011, to borrow a phrase from the almighty dooce, sucked sweaty goat balls.

Which was one reason why I stopped updating this blog.  Every single post would have sounded like an  exercise in whining--or rather, a step in training for the whining olympics.  Who knows, I could have been a valedictorian in whining.  There goes another missed chance at greatness ...

Would you really like to know how much I'd like to show this year the finger?  Fine, here are the stats:


Sorry, the last one was qualitative, rather than quantitative, but I trust you get the point.

The big exciting thing, though:  The Money Pitnew 100-year-old house is coming together as everything I've ever dreamed of.  The fireplace is in; the two "sexy" chairs are in front of the big window; the drapes drape; the wooden floors creak; the rusty-orange/ adobe-colored kitchen walls invite you to sit down and hang out.  The new bedroom furniture is fabulous, including the headboard, for which I used a 20%  off coupon at Pier 1.  The music corner sports a real upright piano, which we rescued from withering away in the music department's basement.  This house--I want to load it on one of those big trailers and ship it back to California.  The house and our local Aldi and the Y.

So yeah, I miss California.  Not necessarily the Podunk part, but heck, the friendliness, the openness, the political (and politicizeable) climate, the intellectual awareness, the upbeat outreach attitude especially in a church context (rather than doctrinal quabbles and Old-Testament brimstone that don't help feed anyone), and did I mention the health consciousness?  So yeah, I have managed to find flaxseed meal and some organic fruits and vegetables here, too, and I spend far too much time on Facebook, but seriously, none of that makes up for California.  None of that makes up for the fact that, in the past three months, it's taken superhuman effort to get up in the mornings and through the day without erupting into tears because Walmart was again out of Little Miss Kickboxer's nitrate-free hotdogs?

No, I'm obviously not pregnant (duh!).  See above.

I swear, Little Miss Kickboxer is putting together her standup material!

H is for Halloween

Not much to say today, other than:  Guess who is getting ready for Halloween?

Have a great weekend, all!
Posted by Charlotte at 11:42 AM

Email ThisBlogThis!Share to TwitterShare to FacebookShare to Pinterest
Home
Subscribe to: Posts (Atom)
Theatrical Milestones tells you what happens when you don't listen to your German grandmother: You move from Germany to California, become an English professor, American citizen, and then a generally annoyed pinko-commie feminist mom and rocket scientist who ends up in Hoosierland. Send me some sanity!